With a busy morning ahead of me I packed a meal and we were out the door. It was once we'd gotten to the gym and I'd realized it would be too long before I saw my next meal and I was...unprepared. I went next door to the coffee shop. They didn't have anything I wanted to eat.

I had enough time to run out and get something. So, I decided to go to McDonald's. Yep. I've told you before, you can find something to eat on almost any menu. I tried the new egg white delight mcmuffin. At 250 calories, it's not too bad. 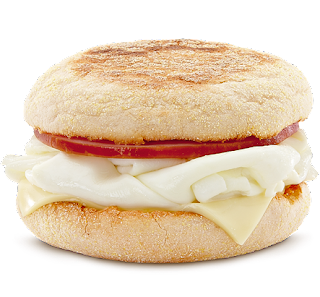 "Does that come with cheese?" I ask. Turns out it does. Hmm? Egg yolk bad. Cheese, good. "Hold the cheese please." I ordered. I was back in the car with my hot cross buns but not before I noticed the in restaurant diners.

It's an older set early in the morning. Well dressed couples, single men...nice crowd. I noticed Cadillacs pulling up surrounding my Volkswagen in the parking lot. Pressed shirts, big smiles, happy people. This is a gathering place.

I held the door for a man well in his 80's to which he quickly took it out of my hand and gestured me through. A stream of people were going through the next set of doors which were being held by another gentleman. He held out his hand as if to receive a tip.

Once the door opening and flirting was all done I was outta there and back on the road with my sandwich. I think it's smaller than the standard egg mcmuffin. Maybe not. It's been a while.

It was egg-whity, and had Canadian bacon...the bun was soft and sort of "whole wheat" or at least kind of brown-ish. I guess that makes it look like healthier carbs. Overall, it was yummy. I laughed, to myself, when she asked if I wanted to make my purchase into a meal. That means add a fried potato...that sort of defeats the purpose of getting the healthier sandwich.

I'll pay for eating the gluten with a bit of inflammation and maybe a bit of tummy hurt later. But in terms of needing some protein and a semi-decent choice it was not bad.

My experience with the clientele was the best part...and it made me kind of miss the old days when I taught senior fitness classes. It also reminded me to slow down, smile, and hold the door.
Posted by Kris Pitcher at 9:30 AM