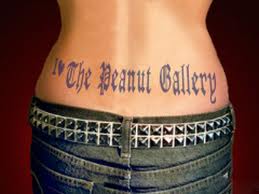 Every one's got something to say, don't they? A lot of people want to offer advice, crazy rituals and "techniques", and even judgments. Knowing the good from the bad and the ugly is important on your way to success.

It's the judgment that can leave us stirring in a negative stew. And if you've ever seen a handful of women together...it can get ugly. "Can you believe she's wearing that!" or "Did you see who she was with?" The gallery's commentator style play by play is followed by lots of OMGs and cackling,

Our own fear of being judged by others in the same way can cause us to have negative emotions. Those emotions build on each other like a mini tornado. We feel guilt, inadequacies, and down right...down.

When people criticize others it comes from a place of their own insecurities. It's hard to remember the peanut gallery is a bunch of know-it-all, insecure wish-they-were's. If some one's comments aren't constructive, it's perfectly fine to say, "Thank you, but no thanks."

Not accepting comments from the peanut gallery will help you let go of guilt and anger you might feel toward them and their comments. Sometimes you just need to lose the peanut gallery. No thanks.
Posted by Kris Pitcher at 4:41 AM