Watching What You Eat

When I used to manage a fitness facility I was amazed by this young teacher who would watch the Food Network for hours while she did cardio. I couldn't imagine the torture of watching that while I was exercising.

This bright eyed, change the world teacher went on to become a pastry chef. And she's probably still doing lots of cardio. But I'm not so amazed any more, I get the attraction. 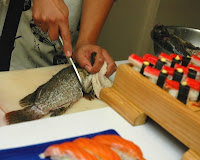 There isn't much on TV at 4:30 AM when you don't have cable TV. There are however two cooking shows and one lifestyle show that often has cooking. I am now, watching what I eat.

Well, not what I eat...but what I could maybe someday on a cheat meal eat. The funny thing is it doesn't bother me or make me want things I can't have. I'm interested in the mechanics, in the science, and in the creativity of it all.

You can watch it, but you can't have it. And while for some it would seem torture, it almost normalizes the process for me. I often get ideas about things I forgot about. Like capers. Throw a few of those on top of some fish and suddenly, you've got fancy fish.

There are certainly lots of ways to keep yourself occupied while you're exercising. Not the least of which is watching TV. I don't know what you like to watch while you're doing cardio, but lately I've been watching what I eat.
Posted by Kris Pitcher at 5:04 AM