My carefully draped scarf quickly became a hand washing hazard as I bent over the restroom sink. Before its tassels grazed the basin, I flung its triangle over my right shoulder and I was overcome. 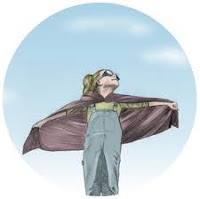 In that swift movement I was transported in time. I could feel the rush of freedom...of flight. My scarf had become a cape, and with a cape...I could fly!

I remember flying through the house with a towel tied around my neck - it tailing behind me as I bobbed and weaved. There's nothing quite like that feeling. Freedom of movement, freedom of spirit. Every kid dreams of being able to fly.

Now, we move quickly but not because we've taken flight. Do the things that transport you. For me, I get lost in my cardio...once I get going. I also feel that sense of flight in specific activities - scuba, and in-line skating. There's nothing quite like the feeling of flight. Some people feel that way when they're riding their bike.

Take time to feel your body move, to get lost in movement. Who knows, you just might take flight!
Posted by Kris Pitcher at 5:00 AM